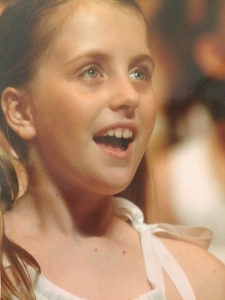 For a positive emotional experience, energy and relaxation, singing together is good for kids’ wellbeing.

In an era when parents like me are concerned about our kids resilience and use of social media, we often turn to the oldest calmer in the book- meditation. When we think of traditional meditation, the old standards of activities like yoga and mindfulness for kids tend to be the first things we try.

However work being undertaken by researchers from all over the world is starting to show what many of us already intuitively believed; singing, particularly in a group, is good for the wellbeing of our children.

For one thing, researchers in Sweden monitored the heart rates of singers as they performed a variety of choral works. They found that as the members sang in unison, their pulses began to speed up and slow down at the same rate.

Choir singing appears to be achieving calming effects in a similar way that breathing and posture exercises in yoga do. It would appear that choir singers not only harmonise their voices, they also synchronise their heartbeats.

It’s not just the act of singing in a group that contributes to wellbeing; it’s the people you share the experience with.  I can see the impact on the faces of the kids I know who sing together. They belong to something wonderful, a community of voices.

Last week my eldest sang with his sensational high school jazz choir in their final performance together (while my youngest was rehearsing in a mass choir at the Hisense arena in Melbourne).

These 15-18 year olds moved through swing, jazz, classical and the blues, with beautiful key changes and multi-part harmonies that gave me goose bumps. They clapped each other with whistles and call outs boosting the vibe in the audience. It was divine. I know my son will miss it terribly and will seek to find something like it next year wherever he studies.

My two older kids have both found their love for the stage and they sure land the parts. They converted a little bit of the genetic material from my (former boy soprano) father into their current lives; lives filled to the brim with music and musical friends. No fewer than nine choirs later and they can harmonise, read music and provide the chorus and ensemble cast that entertains us at home and in the car.

And now my baby has started her first big choir- mind you that baby is eight years old.)  It’s funny how despite the years that have passed, history still has a way of repeating itself. I drove her to her first class, her brother and sister in accompaniment to help calm her nerves on the way. We watched from the doorway for a short while as little girls in purple tops sitting in classes with straight backs, group according to age, clapped, hummed and made potential life-long friends. It was such a precious moment I realized I was holding my breath.

We then slipped away to let our baby bird chirp and sing with her new ensemble.

On our way from the building, it occurred to me how very very lucky my children have been to be a part of the communities of the Australian Girls’ Choir and the Australian Boys’ Choir. These organisations are truly the ground floor apprenticeship for choral and vocal education in this country.

Jonathon Greives-Smith one of the renowned choir leaders in Australia has long told me of the positive effect of singing on educational, social as well as broad health outcomes, and talking about the standout organisations here, especially with children.  He led me to listen to Gondwana Voices. It’s doing important work in Queensland and from their wide activities are coming generations of connected, articulate and excellent musicians to give voice to Australia.

A major challenge is providing these great young singers with opportunity as they grow into adulthood. To go on singing at amateur, semi-pro, and professional level; to the first two there is opportunity whether in Brisbane’s Canticum, Perth’s Giovanni Consort, Adelaide Chamber Singers, or larger choirs like the MSO Chorus or Sydney Philharmonia Choirs but most of the experts say it will depend on these groups reflecting a diverse and unique repertoire to draw the young ones in.

It is for the last group, the truly excellent, international-level, musician-singers who want to be the elite vocal ensemble culture leaders, that Jonathan has set up HALLELUJAH JUNCTION which is shortly to begin national auditions.  He says, “imagine cricket here without a national team, or opera without Opera Australia, Shakespeare without Bell Shakespeare.” The glaring hole, he says, is a national professional choral ensemble. There is yet no ‘top team’ for our kids to aspire to.

The act of singing, combined with the people we share it with, and the excellence and commitment of the teachers, changes lives. For my gang this is how it began, one woman, a singing teacher, changed everything.

Kathy Mikkelsen, was my first school mum friend in Melbourne. Our boys were in the same class. She was also the extraordinarily talented choir teacher at their new primary school. Deeply passionate about children signing, she heard my kids budding voices one day and took them along to her performing arts school where, for the next five years, they were Bruno Mars, Katy Perry, Smurfs and Moomba paraders. They sang on the stage at the Melbourne show and the Arts Centre. Eventually, my now 17-year-old son, would sing with the Opera Australia children’s chorus.

We are whole and well when we balance emotional and artistic and intellectual. This is where choirs offer something unique for our kids.

Choir parents have told me they would love to see the training of a new generation of singing teachers who can give everyone in every primary school 30 minutes minimum of singing, from Prep to Year 6, learning to read simple notation but giving voice to who they are.

Last weekend we were in the audience at the Victorian State School Spectacular where our youngest sang for two hours in the mass choir, developing her voice, her friendships and her place of calm.

*Chloe Shorten is a choir mum of 3 singers and author of two books, if you would like to learn more about the organisations and studies mentioned in this article please contact Melbourne University Publishing for a full list references.